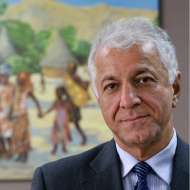 From the local to the international level, Mr. Fariborz Birjandian has served on committees, boards and task forces related to immigration, refugees, diversity, equal rights and the cultural arts. He became a refugee when he left his home country of Iran with his family in 1987. His involvement and work with refugees began in 1987 and has continued these past 30+ years. He initially began this work with the UNHCR and, once settled in Canada, he volunteered with several organizations including the Red Cross and Calgary Catholic Immigration Society (CCIS). In his role as CEO with CCIS, he leads 300 staff members and 1,600 volunteers as they deliver approximately 90 programs and services designed to aid the settlement and integration of immigrants and refugees in Calgary, Alberta and its surrounding communities. He has been instrumental in designing and initiating numerous methodologies related to settlement and integration including the UNHCR Settlement Handbook that is used nationally and internationally.

He has received numerous awards and recognitions for his community involvement, and for his commitment to ensuring that institutions, advisory groups and all levels of government work to recognize the needs and challenges faced by newcomers, promote the creation of welcoming and engaged communities, and recognize and celebrate diversity.