Retention Rates -Do refugees stay in the province where they land?

To learn about the well-being of refugees in Canada, examining whether they remain in the province where they first landed or move on to new locales can provide important information about how successfully they are settling into their new environments. This metric, called retention, also helps provinces understand how well programs to assist with refugee settlement and integration are working, and whether new programs and efforts are achieving their intended results.

Using data from the Longitudinal Immigration Database (IMDB), which combines information from immigrants’ landing records with their tax files, it is possible to study the retention of refugees over time. In this report, we use the IMDB 2016 to look at the provincial retention of refugees for three cohorts based on their year of landing in Canada: 2007-2009, 2010-2012, and 2013-2015. This report looks at retention in Nova Scotia, Manitoba, Alberta, and British Columbia. Figures are generated from IMDB data that have been made publicly available by Statistics Canada. This report provides an example of what can be learned through the creation of customized tables using the tools and interactive applications provided on Statistics Canada’s website, found at the following link: https://bit.ly/2BQAytU (This interactive visualization tool provides a useful way of customizing mobility statistics to meet researchers’ needs and interests).

Figures 6 & 7: Retention in Alberta and British Columbia by landing category for 2010-2012 cohort 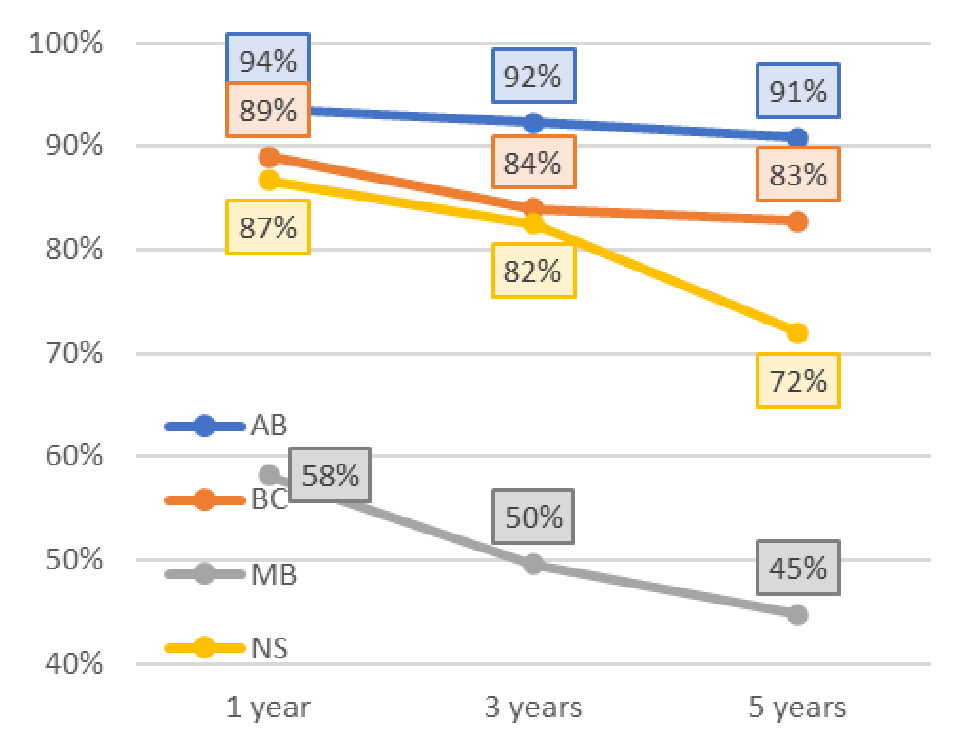 Retention rates vary a great deal by province, and they are typically highest in provinces with major urban centres. Provinces with smaller and more rural populations often struggle to retain immigrants of all categories, including refugees. Both economic and social factors are important to retention: job opportunities and being near to family, friends, or community provide strong motivations for immigrants to stay in or leave an area. Figure 1 offers a snapshot of the differences in retention observed between Alberta, British Columbia, Manitoba, and Nova Scotia for the 2010-2012 landing cohorts.

Figures 2 and 3: Refugee retention in Alberta and British Columbia by landing cohort

Figures 4 and 5: Refugee retention in Manitoba and Nova Scotia by landing cohort

Figures 6 and 7: Retention in Alberta and British Columbia by landing category for 2010-2012 cohort

Figures 8 and 9: Retention in Manitoba and Nova Scotia by landing category for 2010-2012 cohort

Do refugees stay in the place they arrive?: Presentation for BC Refugee Hub Webinar.
The researchers present their findings on the retention rates of refugees at BC Refugee Hub’s Jan. 2021 Webinar on Refugee Research – National and Local Perspectives.