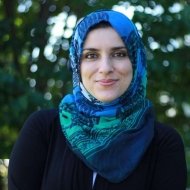 Bayan Khatib is the Co-founder and Executive Director of the Syrian Canadian Foundation, which aims to empower newcomers and people of diverse backgrounds and promote cross cultural exchanges within Canadian society. Bayan is also the Co-founder of the Syria Film Festival in Toronto, which aims to give voice to the struggles and hopes of the Syrian people. For the past nine years, Bayan led a multinational media campaign and spoke locally and internationally on the Syrian crisis. She is the translator of Just Five Minutes: Nine Years in the Prisons of Syria and the author of numerous short works of fiction and opinion articles.