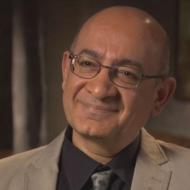 Dr. Abdie Kazemipur is currently professor of sociology and the Chair of Ethnic Studies at the University of Calgary. Originally from Iran, he came to Winnipeg in 1993 to do his PhD in sociology at the University of Manitoba. In 2012-13, he served as Stephen Jarislowsly Chair in Culture Change and Immigration at Memorial University of Newfoundland, where he conducted research on issues related to retention and integration of immigrants. He has also been the founding academic director of two Statistics Canada Research Data Centres at University of Lethbridge and Memorial University. His research is in two distinct areas: the socio-economic experiences of immigrants in Canada, and the socio-cultural developments in the Middle East, on which he has published eight books, in English and Farsi; he is currently working on a new manuscript titled Sacred as Secular: Secularization under Theocracy in Iran. Dr. Kazemipur’s works have been recognized through many awards, including the 2015 John Porter Award by Canadian Sociological Association and the 2018 Researcher Award by the Canadian National Metropolis.