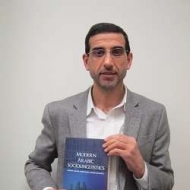 Abdulkafi Albirini was born and raised in Syria, where he completed his pre-college education, obtained a bachelor’s degree in English Literature, and received several academic awards and distinctions.

He came to the United States in 2001 to complete his graduate education and obtained two doctoral degrees, one in the technologies of instruction and media and another in Linguistics. He is currently an Associate Professor of Linguistics and Arabic at Utah State University.

For the past ten years or so, he has been studying the relationship between language and cognition, language and society, and language and history. A main focus of his research is the role of language in social interactions, relations, structures, and change. In his 2015 book Modern Arabic Sociolinguistics, he examines how language is mobilized in conflict situations to mark divergent national, ethnic, and religious identities. He also analyzes the power of discourse and counter-discourse in defining.